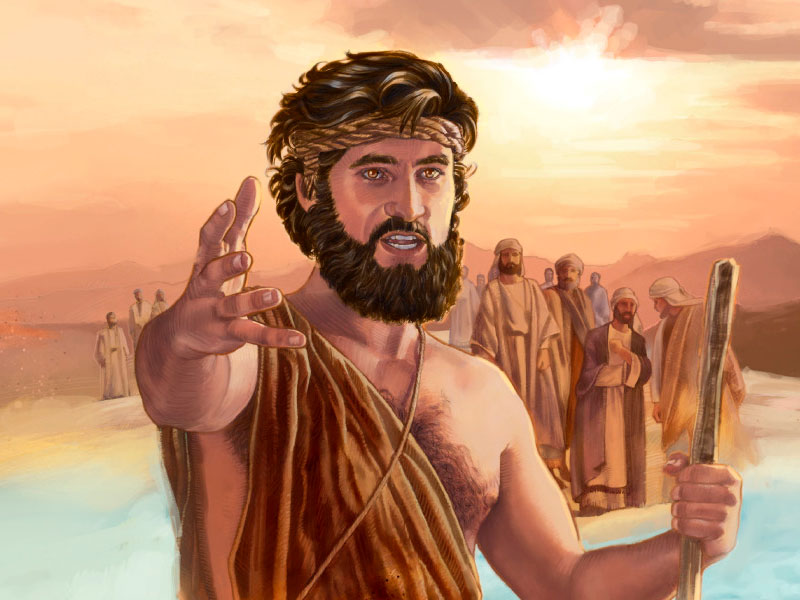 «You brood of vipers! Who warned you to flee from the wrath to come? Bear fruit that befits repentance!»

These were the words of John the Baptist as recorded in the Gospel of Matthew when he spoke to the Pharisees and Sadducees. We are going to learn about the life of St. John the Baptist, and consider what it means for us as Freemasons.

Information about St. John the Baptist, other than New Testament accounts, is limited to what Flavius Josephas, the Jewish historian, wrote in the 1st century.

In the first chapter of the Gospel of Luke, the author states the angel Gabriel foretold John’s birth. Gabriel told Zechariah your wife, Elizabeth, will bear a son; you will be joyful and glad; and you will name him John. Gabriel continued, your son will not drink wine and other strong liquids, he will turn many of the sons of Israel to the Lord their God, and he will prepare people for the Lord.

Later in the same chapter, the birth of the child is described. Elizabeth and her neighbors and kinsfolk rejoiced. The baby was circumcised on the eighth day. Elizabeth named the baby John, which meant «Jehovah’s gift».

John was born to Zechariah, a priest, and Elizabeth, daughter of a priestly family. John was a cousin of Jesus. Frederick Meyer suggests that Zechariah and Elizabeth died when John was quite young. But, by this time, John had learned to take care of himself. He lived in the desert, ate locusts and wild honey, and was clothed with camel hair.

Guinn state John was made a Nazarite for life. Members took a special vow for a fixed term, and abstained from alcoholic beverages, avoided corpses, never cut their own hair, and were strong in spirit. A breach of observance called for purificatory rites.

Another group of religious men, the Essenes, are believed to have worshiped near where John the Baptist lived. Most information about this order comes from Pliny the Elder, Philo Judaeus, and Flavius Josephus. The Essenes were a small Jewish religious order which originated in the 2nd century, B.C. They had disciplines of secrecy, and wore only white garments. Their beliefs included purification through baptism, and abhorrence of untruthfulness. The sect ceased to exist in the 2nd century, A.D.

Biblical scholars differ in opinion about whether John the Baptist was a member of the Essene Sect. Some say it is implausible. Meyer states that St. John was not a member of this holy community. The Essenes wore white robes, emblematic of the purity they sought, dwelt in brotherhoods and societies, and seasoned their bread with hyssop; while John was dressed with a coat of camel’s hair and leathern girdle, was a loner much of his life, and ate his bread with honey.

Because John lived a solitary and austere life, some consider him to have been a monk.

St. John’s life was notable for five reasons; he was the messenger foretold by Isaiah; he was a forerunner and witness to the Christ; he proclaimed baptism of repentance for the forgiveness of sins; he heralded the coming of the Messiah; and, he recognized Jesus as the Messiah and baptized Him.

In addition to preaching baptism of repentance, John denounced the sins of Herod Antipas, especially his marriage to his brother’s wife, Herodias. Herod imprisoned John because John persisted in embarrassing Herod with this accusation. Tradition says that Herod’s and Herodias’ daughter, Salome, demanded John’s head, and John was exe cuted. However, Salome is not mentioned in the New Testament, only «daughter of Herodias.»

John’s place of imprisonment and death was the fortress of Machaerus on the east side of the Dead Sea. He was buried at Sebaste, Samaria, which is now, Sivas, Turkey. The tomb was desecrated in the Fourth Century under Julian the Apostate, and his relics were scattered. Numerous churches claim to possess St. John’s artifacts.

Four symbols are attributed to John the Baptist. They are the color white, the lamb, the axe, and monks.

White represents purity and joy. It is the color of baptism, and is used at Easter, Christmas, and when praising saints.

The lamb and axe are iconographic emblems. John 1:29 states «The next day he saw Jesus coming toward him, and said, «Be hold, the Lamb of God, who takes away the sin of the world!» Biblical scholars have different viewpoints about this passage. Theories include

(1) John did not actually speak these words; (2) Jesus imparted his conception of his vocation to John when they spent time together; (3) John had a revelation about Christ’s mission; and (4) John referred to a sacrificial offering in the Temple.

In the Gospel of Matthew, John says, «You brood of vipers! Who warned you to flee from the wrath to come? Bear fruit that befits repentance. . . . Even now the axe is laid to the root of the trees; every tree therefore that does not bear good fruit is cut down and thrown into the fire.»

John compared the Pharisees and Sadducees to vipers because the snake has been equated with tempting men to sin. John was concerned about the sins of men, and equated the axe with sin. A person who repents is sorry for his sins and failures. These people set good examples, and the trees bear good fruit. If a sinner does not repent, then he sets a bad example, and the tree bears bad fruit.

Monks are the patronage of St. John the Baptist. John’s raiment of camel’s hair, leathern girdle about his loins, and subsistence of locusts and wild honey were characteristic of monks living in the Middle East and North Africa.

Why did Freemasons adopt John the Baptist as their patron saint? In 16th century England, guilds and crafts were required by English law to dedicate to some patron saint. However, some Masons dispute the theory that early English Masons belonged to guilds.

Meyer mentions Girolamo Savonarola, an Italian religious reformer, of the 15th Century. Meyer refers to Savonarola in quotes and italics as «a second John the Baptist.» Meyer continues by saying a legend suggests that when Savonarola crossed the Apennines from Genoa to Florence, his strength failed him. A mysterious stranger appeared, restored his courage, led him to a hospice, compelled him to take food, and afterwards accompanied him to his destination. On reaching the San Gallo gate the stranger vanished, saying, «Remember to do that for which God hath sent thee?»

Could this mysterious stranger and Savonarola have been Masons? I suggest that the beneficent deeds of Savonarola were considered so desirable of mankind that other Masons considered him to be a patron saint. However, more vocal Masons refused to select Savonarola, and adopted the original John the Baptist as their patron saint.

The Masonic Holy Bible says, «The firm integrity of Saint John the Baptist, which induced him to forego every minor consideration in discharging the obligations he owed God; the unselfish firmness with which he met martyrdom rather than betray his duty to his Master; his steady reproval of vice, and continued preaching of repentance and virtue, make him a fit patron of the Masonic Institution.»

Why is St. John the Baptist honored on June 24th? He is one of only two saints where we remember the nativity of the individual. The date was fixed in the late 4th Century as June 24, six months before Christmas Day because according to Luke, Elizabeth became pregnant six months before the Angel Gabriel appeared to Mary.

June is also the time of the summer solstice. The summer solstice has been a time of celebration since early recorded time. Man expressed the equality of time between night and day by dancing, feasting, and playing music. Thus, our celebration of St. John the Baptist is a continuation of ancient customs.

The lamb has in all ages been deemed an emblem of innocence. Innocence is represented by the color white. Originally, innocence meant doing no injury to others. Bro. Haywood says, «The innocence of a Mason is his gentleness, his chivalrous determination to do no moral evil to any person, man or woman, or babe; his patient forbearance of the crudeness and ignorance of men, his charitable forgiveness of his brethren when they willfully or unconsciously do him evil; his dedication to a spiritual knighthood in behalf of the values and virtues of humanity by which alone man rises above the brutes and the world is carried forward on the upward way.»

Monks withdraw from society by living alone, or in monasteries. They try to find God, a new outlook on life, or their own meaning through meditation and prayer. Rev. Bro. Guinn associates the withdrawal of monks as similar to our Lodges. We place a tyler at the door, have fellowship with Brother Masons, transact business, and meditate during ritual of the degrees.

Our Lodges are dedicated to the Holy Saints John. In every regular and well- governed Lodge there is a certain point within a circle. The circle is the boundless universe, and the point in the center is the individual Mason. The circle is bordered by two perfect parallel lines which represent the staffs of John the Baptist and John the Evangelist.

Truth is defined in the Manual of Work. Truth is a divine attribute and the foundation of every virtue; to be good men and true, is the first lesson we are taught in Masonry. On this theme we contemplate, and by its distastes endeavor to regulate our conduct; hence, while influenced by this principle, hypocrisy and deceit are unknown among us; sincerity and plain dealing characterize us, and the heart and tongue join in promoting each other’s welfare, and rejoicing in each other’s prosperity.

Supreme Architect of the Universe, by whose providence your servant St. John the Baptist was wonderfully born. Make us so to follow his teaching and holy life, that we may truly repent according to his preaching; and, following his example, constantly speak the truth, boldly rebuke vice, and patiently suffer for the truth’s sake until we are admitted into the Temple not made with hands, eternal in the heavens. So mote it be — Amen!

Point Within A Circle, The Masonic Service Association of the United States, 1931. Robinson, John J., Born in Blood, M. Evans and Company, Inc., 1989.

The Apron, The Masonic Service Association of the United States, 1932.