THE OLDEST LODGE IN THE WORLD 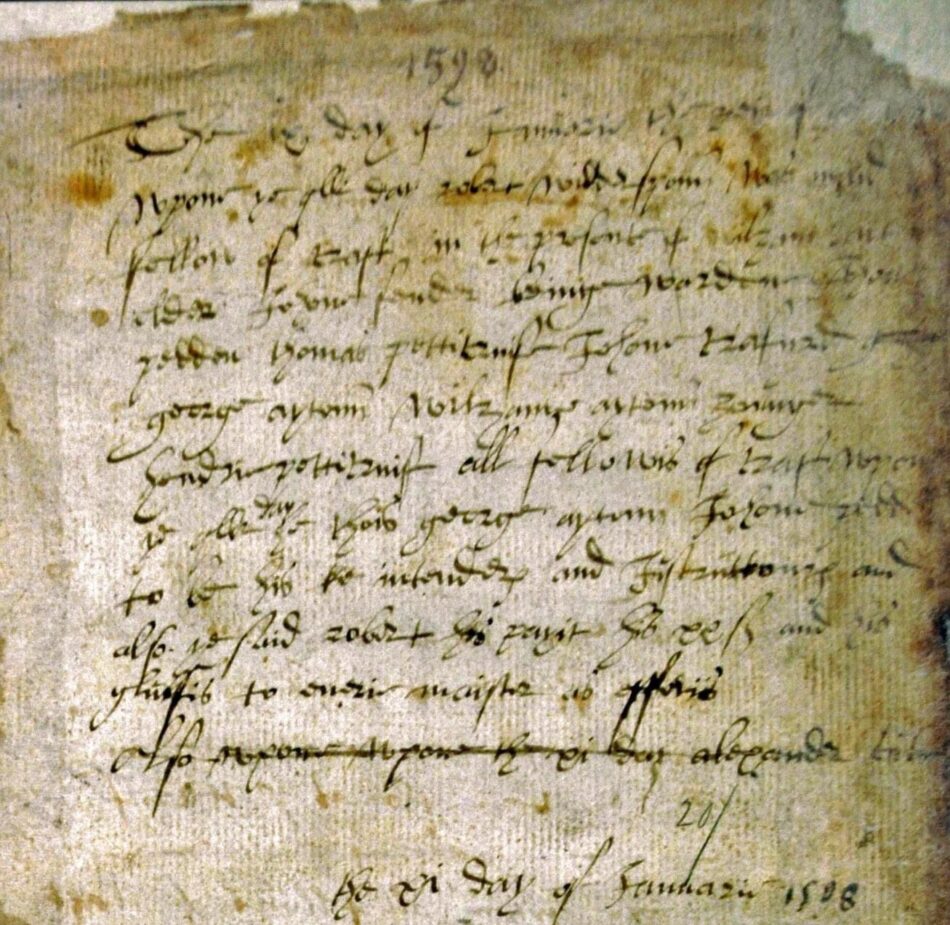 The image below is of the surviving minute book from Lodge Aitchison’s Haven, dated January 9th, 1598.*

This is the earliest known Lodge Minute in the world.

Two other Lodges have over the years professed to be the world’s first.

However, there is no written evidence in the form of Minute books to back up the claims of The Lodge of Edinburgh (Mary’s Chapel) No.1, and Lodge Mother Kilwinning, No. 0.

Aitchison’s Haven cannot be found on today’s maps. It lay to the east of Musselburgh between Levenhall and the little harbour of Morrison’s Haven, which is on the outskirts of Prestonpans.
There is much to be learned from the 80 or so words of this earliest minute.

The candidate, Robert Widderspone, was already an Entered Pentis [Apprentice] on the day of the meeting, before being made a Fellow of Craft.

Therefore, this cannot have been the first meeting of the Lodge but, rather, the first record of a Lodge meeting.

There must have been a previous meeting, at which Robert Widderspone had been Initiated.

In fact, there must have been more than just one meeting, because it is highly unlikely that all eight Fellows of Craft, who are named, would have been Initiated and Passed to the Fellow of Craft in a single, even earlier, meeting of the Lodge.

In short, it is clear the Lodge had meetings prior to January the 9th 1598, but we cannot know when, nor how many, due to a lack of records.

Here is the Minutes in full:

Following the Union of the Crowns in 1603 he became James I of England, but no such legal change took place south of the border where the new year began on 25 March until 1752.

As a result, the same day in January, February or March (up to 24th) can be in different years. In the case of the Aitchison’s Haven Minutes the date 9 January 1598 is, in today’s dating system, 1599.

These Minutes were written in what is known as Middle Scots. We have inserted clarification in parentheses i.e. ‘[ ]’ but where ‘[illegible]’ is given this indicates that there is a word that cannot be read.

The Oldest Lodge in the World – Pt II

Following last week’s post on the above subject we received so many queries and questions that a second post (at least) on the same subject was thought worthwhile.

Firstly, I must make it clear that lodge Aitchison’s Haven was a lodge of operative masons.

That fact raises a very important question. Why is a lodge of operative masons considered to be different from a Lodge of, so called, Speculative Masons?

This artificial division fosters the idea that Scottish Lodges before
the existence of any Grand Lodges (that is, before 1717) were not
‘modern’ or Speculative Lodges.

Stonemason members of so-called, operative lodges worked during the day on various projects like building churches, castles and houses.

However, when in their lodges they were not building anything physical, they used no stone except for symbolic purposes.

To suggest, therefore, that stonemasons, because they were stonemason, could not be Speculative Freemasons seems to be a weak argument.

As the 17th century progressed this argument becomes even less
convincing because these lodges of stonemasons gradually admitted non-stonemasons into their ranks.

The very first of these were aristocrats who became members of The Lodge of Edinburgh in 1634. They participated in the same ceremonies as the stonemason members and to argue that they were Speculative Freemasons (because they were not working stonemasons) seems to be a very strange way of looking at the membership on these lodges.

In other words although these two ‘types’ were members of the same lodge participating in the same ceremonies some were Speculative Freemasons and the others were not!

Towards the end of the 17th century non-stonemasons began to dominate these lodges the best example of this type of Speculative Lodge with a few stonemasons as members is The Lodge of Aberdeen.

The roll of members dating from 1670 shows that 80% of the members were not stonemasons but were drawn from all levels of Scottish society.

Very early in the 18th century we find the first entirely Speculative
Lodge. Founded in 1702 by local landowners The Haughfoot Lodge, (near Stow in the Scottish Boarders), did not have a single stonemason as a member.

This transition from lodges with an operative membership to Lodges with a membership of entirely Speculative Masons can only be traced in Scottish Lodge records, written by the masons of the time showing the development of their lodges from operative to Speculative Lodges.

These records are of the utmost importance for our understanding of the origins of Freemasonry, before the existence of any Grand Lodges.

The impact of this markedly different history is still visible (and
audible!) in Scottish Freemasonry today but that is another story for
another time.

• Aitcheson’s (also spelt Acheson’s, Aitchison’s) Haven was a port lying west of the village of Prestonpans. It was also known as Newhaven and Morrison’s Haven as different times. The map shown here is dated 1630 and is therefore contemporary with the earliest Minutes of the Lodge. Sadly, little now remains of the port. After falling into disuse the harbour was filled in and the area landscaped in the 1920’s by which time the Lodge had also ceased to exist becoming dormant in 1853.