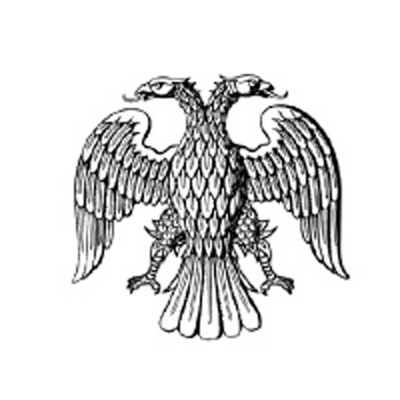 Throughout the entire history of mankind, emperors and kings were attracted to the image of the mighty eagle. A bird that emits so much power, ruthlessness, authority and might was undoubtedly bound to become a most popular symbol among the empires of past and present. The Roman emperors, the Ptolemaic dynasty and the Ayyubid sultans all famously represented their imperial magnitude through the eagle. However, the one-headed eagle knew a specific variation in the form of a bicephalic (double-headed) bird.

The two-headed eagle historically originated in Central-Anatolia, more specifically the homeland and core region of the Hittite Empire during the second millennium B.C. There exist several examples of stone relief decorations and seals dated to a wide range of periods, like the 18th c. BC seal of a double-headed eagle found in Bogazköy or a 14th c. BC relief found in Alaca Höyük. It’s difficult to establish a satisfying explanation as to why this could’ve been used, but it has generally been interpreted as part of royal insignia. The Hittite Empire was effectively ruled by a king, the supreme ruler of the land. Though the Hittites didn’t deify their rulers like the Assyrians, their kings functioned as high-priests as well. The Hittite king-priest, despite the use of official assemblies and legal delegates, went over all facets of Anatolian life. Could the two heads of the eagle represent his roles as both king and priest? Was the eagle a reference to the god Rundas, deity of the hunt and good fortune? Did the heads symbolize east and west, the vastness of the empire? It’s unclear, and will probably remain hidden in the shadows of time.

Strangely enough, the bicephalic eagle disappears for more than two thousand years during which it didn’t seem to have been used anymore in any notable function or representation. It’s only in the thirteenth century AD that the double-headed eagle rises again as a popular imperial symbol in the region. It was effectively adopted by the Palaiologos dynasty of the Byzantine Empire as an imperial symbol and family device. Peter Bang and Dariusz Kolodziejczyk mention in their Universal Empire: A Comparative Approach to Imperial Culture and Representation in Eurasian History (2012) how Medieval emperors, including the Byzantine rulers, adopted Roman insignia without readjusting them to Christian sensitivities. They exemplify this with the symbol of Jupiter, the eagle so popularly used by the Romans on their standards and coins, a practice later continued by their Byzantine successors. In that case, the two-headed eagle could very well be a simple Roman eagle, but with a head facing westwards towards Rome and a head facing eastwards towards Constantinople, consolidating the Byzantine Roman heritage and legitimacy.

There doesn’t exist any clear link to the Hittites. A theory that links it to ancient Anatolian imagery through the Komnenoi (who hailed from Central Anatolia) was suggested by the Greek historian Nikolaos Zapheiriou in his The Greek flag: from ancient times to the present (1947), but this doesn’t find further reflection in scholarly literature and lacks any proper evidence. It is clear that the double-headed eagle only appeared rather late in Byzantine history, and would remain associated with its ruling Palaiologos family all the way till the fall of their capital city Constantinople. In fact, the place where Constantine XI was crowned, in the Church of St Demetrios in the Byzantine city of Mystras, features a marble relief of a double-headed eagle.  He is considered the last Byzantine Emperor, ruling as a member of the Palaiologos dynasty from 1449 to his death in 1453. Nonetheless, the last ones to use the double-headed eagle in a Byzantine context were the emperors of Trebizond, a state that would escape Ottoman conquest until 1461. As a successor state of the Byzantine Empire, they had adopted the gold two-headed eagle on a red background so characteristic for their former overlords. This can be seen in the late 14th century Catalan Atlas, an important Medieval collection of maps made by Majorcan cartographer Abraham Cresques. At the time of the Catalan Atlas’ creation, Trebizond was ruled by Alexios III.

At the same time the Byzantines adopted the double-headed eagle as a major symbol of their imperial power, the Seljuk Turks of Rūm, the so-called Sultanate of Rūm, started to use it in a representative way throughout the 13th century. It’s most probable that the Turks were influenced by their Palaiologoi counterparts. Just like I explained in my piece on the star and crescent, the Byzantine Empire had a certain influence on Seljuk upper-class culture, especially in Anatolia, where the Greek and Christian identity was often a seamless part of the royal court. Rustam Shukurov describes in The Seljuks of Anatolia (2012) how the identity of the Anatolian Muslims was extremely complex, especially the elite, and included Byzantine (Greek and Christian) elements. A member of the Seljuk elite could even at times act as a Byzantine. Additionally, he mentions that the preservation of Christian identity by Greek brides in non-Christian environments was a normal practice. He concludes that Christianity and the Greek language were not foreign to local Muslim culture, but rather formed some of its constituent elements.

It’s therefore very likely that this symbol was adopted by the Seljuk elite of the region, famously featuring in their capital Konya and the Kubad Abad Palace built for sultan Kayqubad I (1220–1236). This heraldic symbol spread beyond Anatolia’s borders and was used outside the Rūm Sultanate as well. It famously appears on the tower of the Diyarbakir Fortress, expanded and fortified by the Turkmen Artuqid beyliks that ruled the area from the 11th to the 15th century AD, and on several of their coins. Notice that none of the Turkic eagles wear a crown, unlike the Byzantine ones. This suggests that the imperial meaning of the bicephalic eagle as experienced by the Byzantines was eventually lost on the Seljuk Turks. Contrary to popular belief, the two-headed eagle became popular among the Turks only after the end of the Great Seljuk Empire (1194), limited only to the Seljuk dynasties of Rūm and the neighboring beyliks. It was not used by the Seljuks of the east.

Besides the better known Hittite, Byzantine and Seljuk use of the double-headed eagle, its occurrence is actually more widespread than one would think. Ivan III of Muscovy and Emperor Sigismund of the Holy Roman Empire adopted the eagle as an appropriate sign of European imperial power from the Byzantine Empire. However, it didn’t always link back to the Byzantines. This was for example the case for the extensive and surprising use of the bicephalic eagle on post-Umayyad Iberian and Buyid Persian textiles.

Between the 11th and 13th century, a real treasure of Muslim made cloths and silks survived featuring a double-headed eagle decoration. The eagles are way more stylized than the Byzantine ones, and form intricate and beautiful adornments. What started out as emblems of local emirs, accompanied by images of lions and other animals, developed in a form of ornamental art after it found its way to a Christian audience throughout the Muslim presence and interaction with non-Muslims on the Iberian Peninsula. Found in the tombs of Saint Zoilus in Palencia, Saint Bernard of Calvó (d. 1243) in the Cathedral of Vich in Catalonia and on the mantle that covered a statue of Notre-Dame de la Victoire in the Church of Thuir in the Pyrénées Orientales, the double-headed eagle was used by Iberian Christians in a religious context of martyrdom and victory over their Muslim foes. An early example of such symbolism and indicative of a Muslim connection to the double-headed eagle is a 1000 AD French version of the Clementine Recognitions. It shows the Archangel Michael killing a devil, while a two-headed eagle can be seen between the arches. As the Archangel Michael was the patron of the Castilian and French Kings, the scene may refer to the killing of the “Muslim devil”, his emblem being attached between the arches.

Another surprising user of the double-headed eagle is the Shiite Buyid dynasty that ruled over Persia and Mesopotamia between the 10th and 11th century. As opposed to the Andalusian use, they imagined the double-headed eagle in a much more spiritual, esoteric way. Again appearing exclusively on textiles, the eagle bears a lot of similarities to Sassanian figures and style, the bird effectively resembling the famed feathered Simurgh creature. The Buyid bicephalic eagle is much more stylized, its head resembling a rooster’s rather than an eagle’s. Unlike the contemporary Andalusian ones or later Seljuk and Byzantine ones, these Persian double-headed eagles had clear religious connotations. A late 10th or early 11th century silk textile found at Naqqārakāna in Iran features three pairs of double-headed eagles who can be seen each carrying human figures. This imagery has been interpreted as a representation of the Ascent to Heaven, the bird carrying a youth with a royal halo enclosed to its chest.

The imagery also evokes memories of the abduction of Zāl by the Simurgh, as mentioned in the Shahnameh. But according to the Persian poet Suhrawardī (1154-1191), who commented on the abduction’s imagery in his mystical romances, it alludes to the famous authentic prophetic ḥadīth of the Green Birds, in whose bodies the souls of martyrs reside. The prophet said about the martyrs: “Their souls are in the bodies of green birds, which have lamps hanging from the Throne, and they roam freely wherever they want in Paradise, then they return to those lamps…” The same motif (but a single-headed eagle), with all the features justifying reference to the aforementioned ḥadīth, figures among the Fatimid paintings adorning the ceiling of the Palatine Chapel in Palermo (1130-1140 AD). It is known that the Fatimid painters were in fact inspired by Iranian imagery.

From the Hittites to Muslim Iberia and Persia, from the Byzantines to the Seljuks and all the way over to the Holy Roman Empire and Russia, it’s clear that the double-headed eagle was an enormous inspiration for royal and imperial power. At times a family’s coat of arms, at times bearing a religious connotation and at times a representation of a monarch’s might, this bicephalic bird remains an impressive symbol of mankind.

For examples and pictures, please visit this board on my Pinterest.

Omer Sayadi (*1993) is a former student of the Catholic University of Leuven with a special love for the Middle East and North Africa. After receiving his Master’s degree in Arabic Language and Islamic Studies, he’s working with both refugees from the region as well as foreigners seeking to learn the Dutch language. He wrote columns on Islam in Europe and migration, and started MENA Symbolism as a means of combining everything history, politics, symbolism and society in one place.